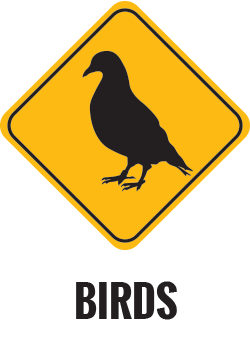 The vast majority of birds provide much pleasure for humans and many play an important role in the web of life. However, some birds, especially the introduced species, can be regarded as pests in many situations and even some native birds are often less than welcome on certain occasions.

If birds are causing you grief, call us. We can help.

The reasons why some birds can be considered pests are:

Droppings may stop up gutters and downpipes, causing roofs to leak. Roofing life can be cut dramatically by prolonged bird usage. The droppings can be responsible for rust and corrosion and the uric acid content can mar the paint on automobiles, machinery and buildings.

Some virulent diseases can be spread by pest birds. Some important fungal diseases are closely linked with bird droppings which serve as a disease reservoir. The better known diseases include cryptococcosis, histoplasmosis, Newcastle disease, psittacosis, gastroenteritis, encephalitis, toxoplasmosis and aspergillosis.

Certain insects, mites and ticks capable of affecting the well-being of humans and animals can be found living on birds or in their nests. Such pests include: bed bugs, carpet beetles, clothes moths, cadelle beetles, red poultry mite, tropical fowl mite, pigeon tick, spider beetle, lesser house fly, larder beetle and many others.

Contamination of Food and Feed

Pest birds may not directly consume much food but they are capable of contaminating vast amounts. Droppings may contain vast numbers of viable organisms capable of adversely affecting one’s health. Contaminated livestock feed and food intended for humans must be discarded, thus increasing costs. Food can also be contaminated by feathers, ectoparasites, debris from birds’ nests and dead birds.

Some pest birds, including some native species, may cause severe damage to growing crops such as grapes, apples, cherries, cereals and sunflowers. They may also feed on garden produce as well as stored grain.

Starlings in particular can create a considerable disturbance when roosting together. This exasperating noise may prevent people from sleeping.

Gregarious birds that form large flocks can become hazardous to aviation. Starlings and seagulls have been responsible for aircraft crashes. In addition, accumulations of bird droppings on footpaths, steps and fire escapes may render them hazardous to pedestrian traffic.

Colourful native birds are often compelled to leave an area when incapable of competing against aggressive pest species for food and nesting sites.